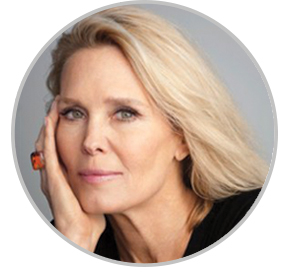 Nancy was one of the first international super models of the late 70’s and 80’s, and appeared on numerous covers of American, British, French, Italian and German Vogue, Mademoiselle, Harpers Bazaar, Self and virtually every prestigious fashion journal in the world. She was represented by Elite Models and worked with the greats of the industry including Avedon, Penn, Demarchilier and Newton.

In the early 90’s, she became an NSCA Personal Trainer, a certified RYT yoga teacher and received a certification from the Physical Mind Institute for pilates. With these qualifications, Nancy became a Fitness Director at an exclusive country club.

In 2007, she co-founded with four Boston Doctors, M.I.T. and Harvard-trained engineers BelleCore LLC, and started the development of a breakthrough body-tool for the beauty/spa, and wellness industries. After three years in development the first product was launched, the HoneyBelle® bodybuffer; it was immediately signed for an exclusive retail agreement with Neiman Marcus. In January 2011, Harrods, London was launched as an exclusive for the UK market. Later in 2011, the BabyBelle® Bodybuffer was added, a smaller but as powerful travel version. The unique mechanical action of the Bodybuffer provides a powerful deep tissue vibratory massage that helps circulation, lymphatic drainage, edema and diminishing the signs of cellulite, helps with muscle soreness and muscle recovery.

In 2012, the Fit version of both Bodybuffers were launched, dedicated to the fitness world, which have gained a huge fan base amongst Elite athletes, Spartan obstacle course racers, CrossFit athletes, Triathlon and Marathon participants who use the Bodybuffer for deep tissue muscle massage pre and post exercise, resulting in increased performance and speedier recovery from D.O.M.S. (Delayed Onset Muscle Soreness). The Bodybuffers are CE Certified, FDA registered and listed 510(K) Class 1 exempt devices.

One of Nancy’s passions is having founded and funded C&N, a baseball training camp for under privileged children in the Dominican Republic, which is ongoing.